Flick in a Limerick

In 2049 society is in decadence

“How does it feel to kill on your own kind”

Am I the only one who can see the fucking sun rise? This breaks the world.

“Pain reminds you the joy you thought was real”

“We can keep at this or we can get a drink”

“Sometimes to love someone you have to be a stranger”

Way to many that has to be witnessed to comprehend what I am talking about. From the scoring to the set designs the costumes and use of color is masterful.

Ryan Gosling has a quiet charisma about him where he never has to be loud or over theatric to come off as a movie star. He commanded the screen for the entire duration of the film and made it look effortless. I like how this film made no bones about making him a replicant in the first minute of the movie. This lead to my curiosity as a viewer. I never got bored and was continuing to wonder what was going to happen next.

Harrison Ford was great here even though he showed up late but that built my anticipation so when he finally appeared as Deckard I was stoked. Even in limited screen time we witness a legend at work as his performance is powerful. I also hope this reprise of his character encourages younger viewers to go back and watch his previous films.

The ladies more than impressed here as well. Robin Wright was dramatic and chic. Sylvia Hoecks and her bangs were bad ass and really showed off during her fight scenes. I thought Ana De Armas stole the show and really dazzled in her performance as Joy. By far the most sympathetic character as you felt her sense of wanting to be a human and doing whatever it took to belong.

Some small roles I want to touch on here that had opposite effects for me as Dave Bautista I thought had a big impact in the beginning. The smashing through the wall scene and my nose candy of the movie “Because you’ve never seen a miracle” was brilliant. Jared Leto on the other hand didn’t make sense here to me. He didn’t contribute anything and overstayed his welcome with tedious monologues and strange make out session. 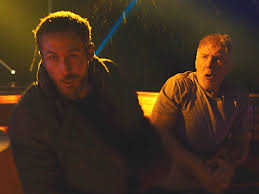 The elvis hologram bar room fight scene between Officer K and Deckard. This was one of the most innovative fight sequences in film history as well as an entertaining  behind the scenes background story.

After nearly three hours I don’t know what is real I don’t know what is false, hell I am starting to question my own existence. That is what makes this film so great. Was one of the most transcendent films in cinematic history worth being revisited? I would say definitely yes because this picture was innovate and unique while still paying homage the first. Denis Vilenueve is a special storyteller as I am sure this was a passion project for him as well as many other filmmakers but with the original Bladerunner’s pedigree being so high no one would think about placing their hands on it.  This film didn’t rehash the same storyline or make a dishonest effort to obtain revenue the way so many dishonest sequels do. Stylistically this film was ingenious with beautiful fashion, cutting edge set design, solid use of color and incredible scoring. The performances are phenomenal including honorable showcases of two big movie stars Ryan Gosling and Harrison Ford. From top to bottom one can make the argument that overall 2049 is better than the original. This movie gives audiences so much to think about after viewing. It asks philosophical questions such as what makes you a human if you are made or if you are born?  Bladerunner 2049 is an ambitious achievement that shatters impossible expectations. Sincerely this replica is more than authentic enough to mirror its prototype.