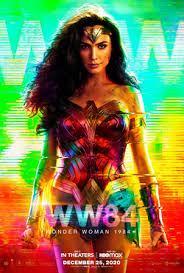 Flick In A Limerick

“The lasso does more than make you tell the truth. It makes you see it too”

“Nothing good is born from lies”

Wonder Woman 1984 is a strong effort that stays true to what it intended to be. The cinematography is visually stunning and all the action sequences slap. Gal Gadot is spectacular again proving her worth and ability to the franchise. There are also several scenes that require her to actually “act” that purist will appreciate. Kristen Wiig nails it in a movie stealing performance. I don’t think that this is a bad film it is just the first Wonder Woman achieves such heroic heights that are damn near impossible to reach. Compounded by the marketing campaign of being able to stream on HBO with a subscription as well as this being the last big movie of the year. While the characters are interesting, they were too underdeveloped for me to get emotionally involved. There were scenes that lingered on too long and several key plot points that don’t make any sense. Though not matching its predecessor, the second installment of Wonder Woman is still a worth while watch that will hold viewers attention throughout.